This newest release is a live CD/DVD recorded at the Musiktheater Piano in Dortmund, Germany on October 23rd, 2019. The CD was produced by Jim Gaines while the DVD is produced by Thomas Ruf. This raw live set captures the virtuosity of today’s dynamic Allison. While the DVD lets the viewer witness each bead of sweat from this master. Allison states “I actually prefer live performances because you can communicate and interact with the audience. I basically feed off of that energy, combined with my group’s talent and personalities.”
​
The band features Allison, guitar and vocals; Dylan Salfer, guitar; Jose Ned James, sax and percussion; and the rhythm section of George Moye, bass; and Mario Dawson, drums.        Allison has improved as a songwriter and five songs are reprised from his last album. Included are “Night Train”; “Cruisin For A Bluesin”; “Same Ole Feeling”, “Backdoor Man” and the slow blues “You’re Gonna Need Me”. The soul dripping “Call Me Momma” first appeared on that last Jazzhaus recording. Allison always includes some of his father Luther’s songs and this time it’s “You’re Gonna Need Me” from 1979; and “Let’s Try It Again” from 1989. 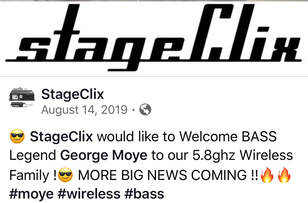 ["Mu-Fx products are used by hard working musicians at all levels.  It has been rumored that our pedals have been seen on the rigs of many famous artists.  We strive to make the best product possible and we continue to modify our products based on input from these musicians."

[“Talking of cats – there is in fact one cool cat onstage right now…
His name is George Moye, and George, aside from playing a funky bass, is doing all the between songs talking. It’s the talking done on fretboards that speaks the loudest this evening though...”]
Malina Moye & George Moye with AmpKit at NAMM 2013
Published by Agile Partners | February 2013 | You Tube

“We were honored to have Malina Moye as our featured guitarist for NAMM this year. She and George hooked up at our booth for some improv using AmpKit and LiNK HD. Malina is playing into her personal Wah pedal, which is then hooked into AmpKit on her MacBook Air via LiNK HD. George is similarly plugged into LiNK HD, leading to a Bass setup on the iMac you see behind him.”
Bernard Allison Group - "Live at the Jazzhaus" (CD+DVD)
January, 2011 | Courtesy of Jazzhaus

"Live at the Jazzhaus" was recorded and filmed at the Jazzhaus in Freiburg in November 2010 and was released on the January 28, 2011 on Jazzhaus Records. The record contains primarily original compositions of his last two studio album "The Otherside" and "Chills & Thrills" but also songs written by his father Luther Allison. “Live at the Jazzhaus” the best product to get an impression of the excellent qualities of the Bernard Allison Group, which is playing around 150 shows every year worldwide with their mix of blues, soul, funk and rock.  The Bernard Allison Group includes; George Moye (bass), Erick Ballard (Drums), saxophonist and percussionist Jose Ned James, Toby Lee Marshall (keyboards) and as a second guitarist, Mike Goldsmith from Freiburg.